What Are We Hoping For? 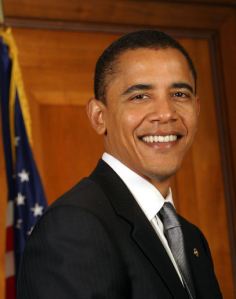 Alright, I was wrong. Hillary Clinton will not be the next POTUS. I guess the memory of her husband’s misAdministration is too vivid in the national memory for a Clinton rerun. Maybe the American people are regaining the brains they lost during the Reagan campaign. They are not voting for the wife of the crook who signed NAFTA into existence. Maybe the people who just lost their homes remember how Bill Clinton destroyed the social safety net . I most certainly remember that Bill Clinton signed the Financial Reform Act of 1998, which was a major factor in the stock market crash of 2000 and the mortgage meltdown of last year. Whatever the reason, the wife of the crook who pulled the great National Health boondoggle will not be president.

So now we are going to have Barack Obama as our next POTUS. I know that he is going to be the POTUS because McCain’s divorce has been all over FOX McNews and CNN. If McCain was supposed to be POTUS, his divorce would be sat on like they sat on Poppa-Doc Bush’s connection with the Moonies or Baby-Doc Bush’s coke habit. The morally hypocritical American voter would never vote for a divorced president. Look at how the Democrats have been whoring themselves to the religious right. So we are going to have a Black candidate for POTUS and his slogan is “Dare to Hope”. Okay, what is it that we can dare to hope for?

Presidential Administrations follow a certain pattern. The Republicans come into office and rape and ruin the economy and then the Democrats come in and are forced to make some very unpopular decisions in order to repair the economy. Sometimes these are long term decisions. For instance, Jimmy Carter ascended to the Oval Office after 6 years of Nixon and two of Ford. The economy was being strangled from the results of the Vietnam War and the job market was being choked by returning vets. Carter had to raise the interest rates to slow inflation, raise taxes to restore the treasury, and give tax breaks and special low interest business loans to encourage new industry and new jobs. Four years later, the Reagan team took over and took credit for all of Jimmy Carter’s unpopular work.

Barack Obama is going to take over the Oval Office at the end of the Bush misAdministration. Need I say more? Bush has led the crookedest administration since U.S. Grant. Obama will take charge of a treasury that has been utterly raped through corporate welfare, faith based initiatives, irrational taxation, and the Iraq war. The treasury has been so badly depleted that the U.S government has been forced to sell our interstate highways and bridges to multinationals just to make payroll. Oil consumption has passed critical mass years ago. Obama’s energy policy made perfect sense 20 years ago, but today it’s too little too late. Since our GNP is held together entirely by oil production, Obama is looking forward to massive inflation as the dollar devalues. Only an idiot would want to be president after Bush.

Jesus Christ and all Twelve Apostles could not repair the mess that Bush will leave behind. It may appear that Obama can walk on water, but the truth is that he is only another politician. I do not expect him to do what needs to be done to clean up the mess. I do not expect Obama to stand up to the multinationals that have sucked the wealth out of this nation. I do not expect Obama to stop corporate welfare or to even force corporations to pay their fair share of taxes. The president does not possess a magic wand to make there be more oil. Oil prices will continue to rise as extraction and refinement become more and more difficult. As oil production drops, so will the value of the dollar. Since we cannot expect big business to return industry to American soil, the economy will go totally to hell.

So while Obama tries to repair the damage, he is going to have a Greek Chorus of Republicans telling us how things were better under Bush. Obama gets to take the blame for eight years of corporate welfare and subsidizing Christianoid megachurches. He will take the blame for the coming oil shortage, even though there is enough blame for that to go all the way back to the FDR Administration. The U.S. will undoubtedly attack Iran in order to maintain the dollar, and Obama will get the blame for that as well.

Then come 2012, and the Republicans will strut around like peacocks, telling us what a hero G.W Bush was. They will tell us that we should never have elected a Democrat. Bush will have done all the damage, but Obama will get all the blame.

I remember being in the fourth grade at the Florence M. Burd School in Andover New Jersey. I must have been all of nine or then years old. My teacher, Mr. Schierholtz was showing us slides of his adventures while hitchhiking across India. We saw pictures of people literally living on the streets of New Delhi. This was scary stuff for a nine or ten year old during the wonderful years of 1967. So Mr. Schierholtz got in front of the class room and promised us it would never happen in the United States.

Mr. Schierholtz explained all about FDR and the New Deal, and how the government had laws to prevent the conditions that created homelessness in America from ever happening again. He explained about unions and how they work with industry to create fair wages and safe working conditions. Then Larry, who sat in front of the class told us about all the neat benefits his father’s union had. Poor Mr. Schierholtz, he didn’t mean to lie to us. Back in 1967, we were still riding a wave of optimism. The economic equality that came out of unions was still fully in effect and even janitors could afford their own homes. Jim Crow had been exorcised out of our national society, and the idea that war and violence was wrong hit our national consciousness like a bolt of lightning.

The clock was ticking down to the year 2000, and America was waiting to become the Jetsons. The 24 hour work week was being experimented with. The link between cancer and cigarettes was being explored and cigarette ads were being banned on TV. In South Africa Dr. Christian Bernard was pioneering organ transplants while the rest of the world protested Apartheid. With all this wonderful and exciting stuff going on, how were we to know that in 1968 a man would be elected to the presidency who would be the seed that brought all this down. While the man himself, Richard M. Nixon, left office in disgrace, the aids and assistants he brought to Washington with him remained to become The Legion of Doom who destroyed the United States.

How could Mr. Schierholtz ever dream that people could be so short sighted as to attack the very investment laws which American prosperity depended on? Who would have thought that America would be so spineless as to get behind Reagan and his Nixon Administration survivors as they attacked the very unions that protected the rights of the working man? Employment benefits are now “golden handcuffs” used to make workers too afraid to stand up for themselves lest they and their families be left without medical care. Jim Crow triumphantly returned on the shoulders of his neocon supporters after affirmative action was struck down. Universities can once again safely discriminate against minority students. How could anybody dream that in 2003 we would get embroiled in another Vietnam? The Neocons successfully derailed the year 2000 and turned the clock back to 1929 through deregulating the stockmarket. The Market crashed partly because brokers were selling on the margin again. Those Americans still fortunate enough to have a roof over their heads have to work 90 hours a week to keep it. Health care is reserved only for the healthy as the HMOs try to drop all the terminal cases to die as indigents. All of America has become New Delhi in 1967

Last month 1 out of every 464 homeowners had foreclosure papers filed on them. The neocon locusts who have literally eaten us out of house and home, have been pointing the finger of blame at subprime mortgages, crooked mortgage brokers, and the victims of the meltdown themselves. They have been blaming everything except themselves. They lowered the standards and changed the laws which would have prevented the meltdown from happening. These locusts have so badly screwed the economic infrastructure that the mortgage meltdown has reached Beverly Hills and a celebrity is having his house foreclosed on.

84 year old “Tonight Show” co-host Ed McMahon broke his neck and has been unable to work. What has this country come to that an 84 year old man is unable to enjoy his retirement, and has to work to keep his home? What has this country come to that an old man ends up having an accident and instead of being able to recover in peace, medical expenses force him to lose his home? What’s worse is that the only reason this has made the news is that McMahon is a celebrity. Thousands of other retirees have also lost their homes and are now living on the streets, but that never makes the news.

We don’t have to worry about Ed McMahon living on the streets, because his fellow T.V. Star, Donald Trump, is coming to his rescue. Donald Trump is probably the biggest media whore in America. Starting with his divorce from Ivana in the 90s and his marriage to his current trophy wife, Trump all but throws himself into the path of the paparazzi. His reality TV show demonstrates the Financial Industry’s favorite past-time of psychologically torturing and humiliating anybody whom they see as having less power than they do. His signature “you’re fired” is actually a mercy-bullet for those he turns it on. Take my word for that. I had once been a trained monkey for something as evil as Trump. The people you need to pity are the ones he keeps.

Le’ Donald, as his ex-wife called him, was one of the architects of the current housing crises. As an untiring opponent of federal regulations and rent control, Trump helped to create the conditions of homelessness. As a mortgage investor, he was part of the refinance shell game that caused European investors to pull their money out of the American market, and triggered the meltdown. As a business man, he was not above cutting corners or breaking laws as the fines he had to pay were way less than the profits that he made. Yet, you might notice that Trump is not losing any of his properties. As a matter of fact he is gobbling up foreclosures like they were M&Ms.

One of the Foreclosures he wants to gobble up is Ed McMahon’s house. So here’s Trump trying to look as if he has something that resembles a human conscience. He stands up so the Paparazzi can take pictures of him buying Ed McMahon’s house so that he can lease it back to McMahon. Not give it back to him, lease it back to him.  He is going to make McMahon pay rent for his own home. McMahon is 84 years old with a broken neck. He is not long for this world. After McMahon dies, Trump can either evict the widow McMahon and sell the house or continue to lease it back to her. Either way, Trump has himself some prime Beverly Hills real estate.

Well, I guess that’s a little better than simply kicking the McMahon’s out in the street like he’s done with so many other elderly home owners, but you have to be touched by the ironic hypocrisy of the whole thing.

Boycott the Olympics: The Thin Veneer Over Genocide and Oppression